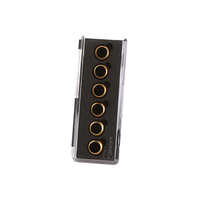 The Filter 6-Pack is part of PolarPro’s Cinema Series line.

The Cinema Series is for pilots who demand the absolute best.

The Cinema Series for the DJI Mavic feature an aluminum frame which is thin enough to stay on during gimbal start-up.

Each filter is manufactured with PolarPro’s AirFrame featherlight design for smooth gimbal operation.

The Cinema Series for the DJI Mavic comes with a lifetime warranty ensuring they will last.

ND4/PL Filter (1.31g): This filter reduces the camera's shutter speed by 2 f-stops and polarizes light. We use this filter most often when filming at dusk or dawn, or on cloudy days.

ND8/PL Filter (1.31g): Reducing the camera's shutter speed by 3 f-stops, the ND8/PL is the perfect filter for partly cloudy days. The polarizing aspect of this filter reduces glare and increases color saturation.

ND16/PL Filter (1.31g): Our go to filter when it is sunny out, the ND16/PL reduces shutter speed by 4 f-stops and polarizes the scene for capturing vivid colors on bright sunny days.

3-Stop Neutral Density Filter (ND8) (1.06g): The ND8 filter is what we use on partly cloudy to mildly sunny days where we need to knock the shutter down by 3 f-stops to achieve a shutter speed of 1/60th.

4-Stop Neutral Density Filter (ND16) (1.06g): The ND16 filter is what we use on very bright days to reduce shutter speed by 4 f-stops.  We generally use the ND16 filter while filming in the desert or over snow.

The goal is to reduce the camera’s shutter speed to 1/60th to give aerial videos a smooth cinematic look, rather than a choppy high shutter speed look.